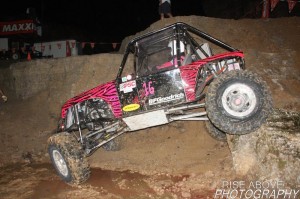 Bill Barton was the only Unlimited Class driver to show in Hannibal, MO. Travel cost and timing are reported to have kept the class to just one team, Making it easy money for Bill and Chicky Barton to come out the winners headed to the W.E.ROCK Eastern Series Championship.

With ten teams competing in the Pro Mod class, there was sure to be some great driving, regardless of the

impending bad weather. The teams worked hard for the entire event, battling for just inches once the rain made the courses very difficult for everyone. Derek West came into the event after racing the week before at the Dirt Riot Series in the same car and doing some heavy damage to the front suspension. He could not afford to miss this event after finishing first at Dayton. Three teams came to Hannibal that did not compete in Dayton, Josh Crowe, Kyle Bruso and W.E.ROCK first timer Chad McCormack.

The Pro Mod’s started on A-3 and Mike Thompson posted a course best -10 to start the weekend craziness rolling. Danny Rohrer posted a -1 to show that he would be in the running all weekend. The courses were very brutal with only two drivers completing all four courses on Friday night, those two being Josh Crowe 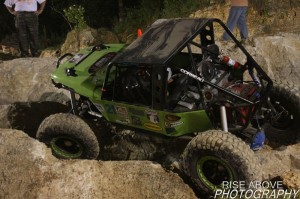 and Brandon Blume. Saturday morning opened with rain again falling on the comp site in Hannibal, rain in Hannibal makes the courses very difficult and even with courses changed before the 7pm start time to accommodate the wet courses; they raised havoc with all the teams.

By the time the shootout started Mike Thompson had  driven into third, just 8 points ahead of Derek West. Josh Crowe was in second place 11 points behind leader Danny Rohrer. The shootout ended up being the best obstacle of the event with enough bonuses available for teams to have a chance to move around in the standings. Shelby Gilstrap was first to run and posted a score of 22 after forgoing the final bonus and catching a couple of cones. Brandon Blume was next up and posted a -13, having taken all the bonus lines but catching a couple of cones along the way. Derek West was third to run and posted a Shootout best -24, 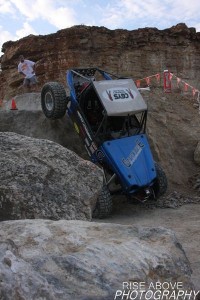 moving him past Mike Thompson. Mike Thompson was fourth up and needed a great score to keep in third, but a couple of cones got in the way and Mike posted a -1 and dropped to fourth place. Josh Crowe was next up and looking for his first W.E.ROCK podium finish, after driving great all weekend he posted the second best shootout score of -23. Josh’s run put the pressure on the leader, but seeing the leader was easy going Danny Rohrer, anything was possible. Danny and spotter Chad Rolfert ran a great course but nearly made a mistake on course flow, correcting themselves before continuing to the next gate, they were able to finish the course with a -14, giving them the win by just 2 points. 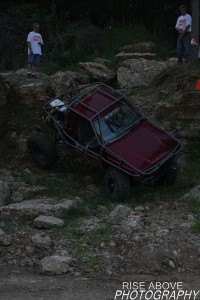 W.E.ROCK first timer was the father and son team of Glen and Alan Thornton.

Bryan Cooper and spotter Scott Angell were the only team to finish three of the four courses. Duane Garrettson and spotter Jeff Spear were close behind in second and only 14 points behind. Again, the rains on Saturday made the course tougher than expected and good scores were hard to come by.  Mike Smith and Chris Endres were able to post a score13 on course 2 and a 9 on course 3 moving them into second place for the weekend. Duane Garrettson dropped to third place. Bryan Cooper and Scott Angell held onto their first day lead and win by a margin of just 17 points. Bryan and Scott have committed to finishing out the W.E.ROCK Season, but the series point’s race is still between Duane Garrettson and Mike Smith, who are now tied after Hannibal.