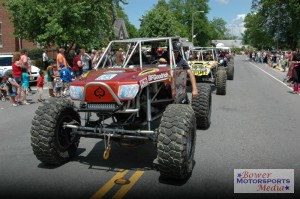 The crowds came from multiple counties to the top of the hill to watch the W.E. Rock event under the lights on Friday and Saturday night.  The Tennessee skies opened up for a while adding one more element of difficulty to the already natural vertical climbs and aggressive side off-camber climbs: Wet Rock and Sand.  A previous mining ground, the rocks changed with every run as the 35″+ tires shot them across the course and the weight of the custom built rigs crumbled the ledges.

The stage for the day started in Downtown Dayton Tennessee when four of the competition rigs showed up to join in the Strawberry Festival Parade that went through town.  Passing out thousands of fliers, kids were yelling “WERock” from the crowd as the cars passed by and revved their engines. 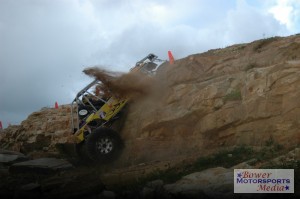 Back at the competition site, trucks rolled in all day filling up the fields with people ready to watch the best of the best on the rocks.  The night before had proved to be no different, and no lack of entertainment. The points coming into night two was so close that anyone could still win in each class; and that’s exactly what happened!

The Unlimited Class had four strong competitors that pushed each other to finish for the win.  The Courses on Saturday night were more accomplishable for the rigs than they had been the night before.  Undoubtedly, Bill Barton and son spotter Chicky Barton had the best night with multiple negative scores, putting them in the lead going into the shootout.  The crowd favorite, Wes Keen, had a challenging night after he rolled on his second course and spent the rest of the night trying to get the 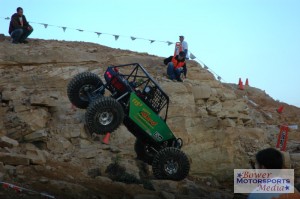 rig started.  With the help from the crowd he rallied a new starter, new spark plugs and some JB weld to get it started and try to pull through the gates for the shootout.  Unfortunately, he would not make it.

The shootout was a 15 minute run that would include a rock crawl section and “bonus land” where competitors could pick up -25 points.  Alex Vaughn made it through the first rock crawl section and backing out through the gates realized that he had something wrong with the rig; part of the frame had broken off requiring welding to continue.  Brian Milsap took on the course next and was the first to go through the bonus land taking a total score of -2, a great run for the team.  Last on course and having fun making all the obstacles was Bill Barton.  They took every single bonus option and came out with a score of -23 keeping their first place lead by well over 60 points. 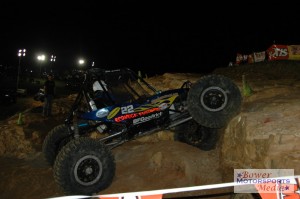 The Pro Modified class was composed of 7 rigs and by the end there were still 6 running, almost.  Kenny Blume had started the day in the lead and had a rough Saturday night breaking his rear drive shaft on the first course, then he did a 2 and a half roll down his final obstacle and showed up to the shootout with quite a noise rumbling through the engine compartment!  Shelby Gilstrap who had a decent day on Friday also ended up rolling and breaking not completing a majority of the courses on Saturday.  Jonathan Dawes in the only diesel powered vehicle was seen under his rig at different points during the night as well. 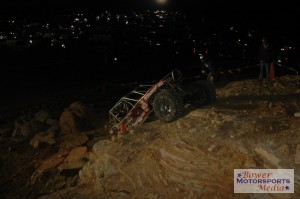 As the score card shows, the best performances of the day was from Derek West and Ritchie Keller who had completed a desert race in the same car just two weeks before.  When it came time for the shootout the mid pack was tight in scoring, but Derek West was sitting pretty solid in the first position.  The Bonus Land gave the Pro Mods a bit more of challenge than the Unlimited class making it fun for the crowd to watch all the uphill climbs.  At then end of the night, Derek West would still complete the entire shootout course even though he didn’t have to for points purposes.  Kenny Blume took second and Justin Lawson took third. 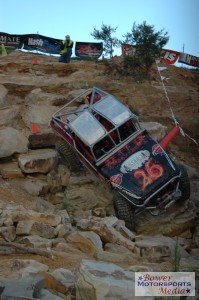 The Modified Stock class had some good competition going between Duane Garretson, Mike Smith and Kelly Young.  They skidded across rocks, got high sided and accomplished some impossible looking dropoffs.  The Mod Stock class added as much entertainment to the show as the Unlimited Class did this weekend.  As the points settled out at the end of the night, Duane Garretson and Jeff Spear took home the first place trophy.

Still a new class in W.E. Rock, Brandon Hudson and Alan Shirley showed their trail driving skills in the Trail Class made for the every day wheeler that wants to compete.   They broke early on Friday, went home, fixed the rig, and showed back up on Saturday night to earning some very impressive scores for their first time out in front of a crowd.

Overall, the weekend was excellent with crowds hanging out until the competitions were over after 1am both nights.  The outpouring of caring and gifts for property owners and event host Kenny and Julia Kizzar who lost everything in the recent Tornado disaster was amazing.

Pictures and Videos will be posted this week. 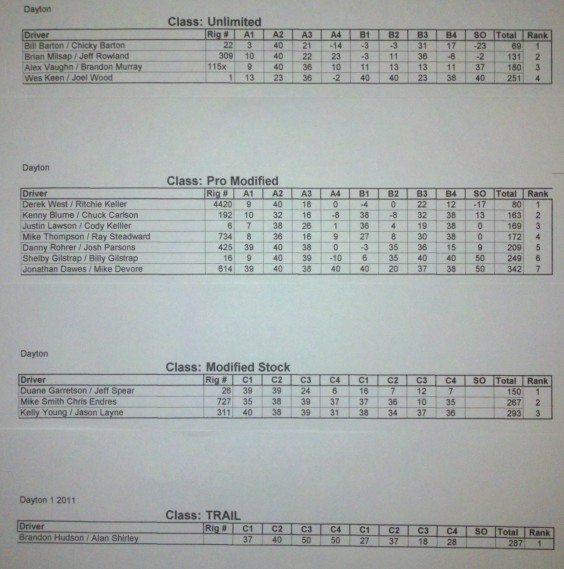