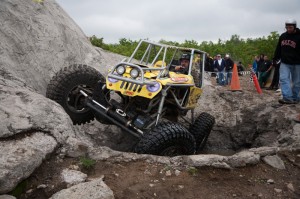 PLACERVILLE, CA    MAY 25, 2010: The Maxxis W.E. Rock Eastern US National Series opened last weekend at the Rausch Creek Off Road Park in Pennsylvania.  “It was a good weekend of racing, but the shootout on Sunday was crazy with all the bonus line attempts,” said Bruce Shallis, Rausch Creek owner.  The bonus lines had the potential to subtract 160 points possible from scores.  Amazingly there was only one lead change, but many separated their lead significantly. 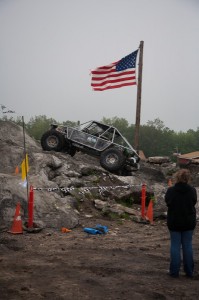 includes a 20 ft vertical climb called the “Hands Climb.”  The weather also always plays a role in this event, “the most challenging part of this competition came on day 2 when the weather turned cold and the rain came out,” said Rich Klein, W.E. Rock Promoter.  “The track changes drastically when you are rock crawling in the rain.”

There was plenty to talk about in the competition zone.  Carl Shortridge backed up his 2009 East Coast class win by placing 1st over Allen Woodson, who came back after a year off the series.  Long time western series runner Hal Frost took 3rd place in his first ever eastern event.

In the Pro Modified class, Ken Blume found himself with such a huge lead going into the shootout on Sunday that he didn’t have to compete, but decided to attempt some of the undeniably hard bonus lines and maintained the lead for the 1st place finish.  Mike Thompson took the 2nd place podium spot, finding himself on the podium after three years and Derek West took a 3rd place finish. 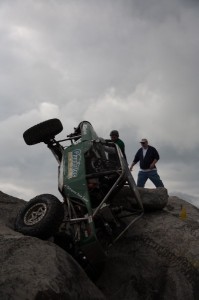 The W.E. Rock General Store made an appearance in Pennsylvania hosting different products for sale including Slime, Losi R/C, Nash Fuel, Master Pull, King Shock, and Spidertrax items.  The Vendor Row at all the W.E. Rock events has a selection of local vendors along with products from the General Store.

The next event in the Eastern Series will be held on June 26th and 27th in Dayton, TN.