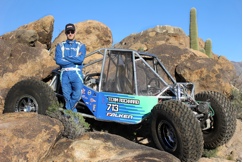 This past weekend marked the start of the 2015 W.E.Rock Series in Congress Az. Not only was it the first round but also it was the largest car count in the Unlimited Class in at least 4 years. Competing against eleven other teams is a huge under taking. Justin Hall is no stranger to performing under pressure and that is just what he did to land himself a solid 2nd place finish against some of the top teams. Justin and Father/Spotter Mark Hall embarked on the twelve-hour drive to be apart of it all. Hundreds of spectators came out for this one-day event to watch some of the craziest action to come to the small town of Congress. The courses were tough and the competition was tougher. The Arizona rocks are one of kind, which made the courses extremely technical; everything from crazy climbs and drop–­­­­­­offs to some tight squeeze sections. 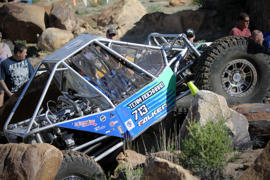 Here is a little history about Justin Hall, he was diagnosed with Crohn’s Disease at the age of 19 and battles the horrible disease everyday. Starting the drive Thursday, Justin was having a really bad flare up which would last well into race day. “I was worried that the flare up I was having would really effect my driving …” Said Justin “…it takes your mind off the courses and could really play a big role in how your day goes. ” As any strong competitor would, Justin did not let that slow him down.

Sporting the new Falken Tire livery, Justin and his Crawler take on the six grueling courses in hopes of making it into the shootout. After a hard fought battle all day between Justin and two rear steer buggies, he would find him self in 3rd place going into the shootout, with just a mere 6 points separating him from first place.  Justin was the only NON-rear steer driver to be within reach of taking over the 1st place spot. Justin and Mark went into the shootout course knowing that they had to put down an amazing run in order to put the pressure on the two drivers ahead of him. Justin took charge with an amazing run and was able to bump up one place for a solid 2nd place finish to end the day. 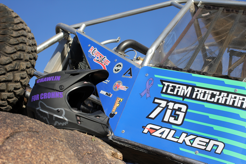 Justin and RockHard Racing’s next wild adventure will be the first round of Nor Cal Rock Racing in Sacramento, CA on March 28th. Where here will be campaigning his Falken Tire/RuffStuff Specialties equipped Suzuki Samurai.

Justin Would like to thank his amazing Marketing Partners, without their help RockHard Racing would not be ablt to do the things they do. Falken Tire, RuffStuff Racing, R&B Company, JM Rigging, Nitro Gear and Axle, ARB, Dynomax Exhaust, Raceline Wheels, South Bay Driveline, Savvy Offroad, FabWorx Offroad, TBC, and MJ Motorsports