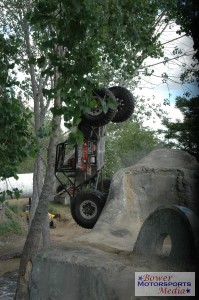 Jesse Haines Attempting the Half Pipe

Excitement abounded for the fans at the man-made course at Surplus City Jeep in Oroville, California for this past weekend’s events. The second round of the WE Rock Western series was decided in the shootout. Going in, Jesse Haines with spotter AJ Seckman led by 14 points over Brent Bradshaw and Chris Poblano. Brent took his turn first on the shootout course, and with the help of his spotter and spotter strap, they one-shotted the Half-pipe and were able to move on to the next bonus. Many a driver had really worked the Half-pipe prior to Bradshaw’s attempt, so Brent and Chris knew exactly what to do (check out Justin Hall’s free climb on the video below). Bradshaw delivered a -15 on the shootout course, giving him a score of -8.

Jesse was next on course and got hung up on the second obstacle requiring a number of attempts before completing, by the time he got to the Half-pipe, he flew vertically without the aid of a spotter strap and came down hard on his belly pan. Haines gave it one more shot and landed harder still, cracking his transmission in half. Bradshaw took the win. This is the second WE Rock win in a row by last year’s series champion Brent Bradshaw.