Skip to content
Previous Next
W.E. Rock at Donner Ski Ranch Turns Out Another Great Event Over Father’s Day Weekend 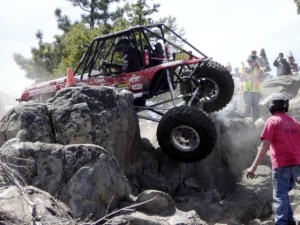 RENO, NV   JUNE 25, 2010:  The most highly anticipated event of the year, Rock’n @ the Ranch W.E. Rock Western US National, held at Donner Ski Ranch over Father’s Day weekend, was a competitor and crowd pleaser.  The event attracted 28 teams with spectators and crews littered all over the mountain.

“The courses were insane, we beat ourselves and our rigs up,” stated competitor Matt Messer from Trail Gear who took his first ever Unlimited class win.  Drivers competed on some of the hardest natural terrain courses this location has ever seen and there was plenty of rollover action, which is typical for Donner with the amount of ledges, drop-offs and amazing rocky formations.  “We really had a lot of fun putting these courses together, they were really technical and focused on the drivers skills,” said Rich Klein, event promoter.

Kicking off the weekend events, Torchmate hosted Tech and Registration at their facility in Reno, NV with an excellent BBQ and tours of their shop.  “It was cool to see the technology that helps build our technology on the course,” commented Klein.

Matt Messer from Trail Gear took his first ever win in the Unlimited class, with Dion Wakefield behind him by 4 points when they both scored and equal 12 points in the final shootout.

The Pro Modified class had quite a bit of drama surrounding the weekend starting with Nicole Johnson blowing up her rig on day 1, but instead of packing up, they rallied the crews of 10 different teams to fix it and took 3rd place overall.  Class winner Nick Campbell’s spotter Jason Berger lost part of his finger while getting Campbell to the next best position, Berger not only finished the course with Campbell, but finished the day for the win. Buss Bronsema slid into second place with his solid runs.

In the Mod Stock class, Dan Patternson took first place and Todd Stephensen was in second.  The F-Toy class winner Chris Mercer continued his streak, with Nathan Unruh in second, Todd Tamietti in third and Chris Dunkin who ran C4 without a front locker in fourth.

“There has been a different winner in every event in the Pro-Mod and Unlimited class. It shows that there is good diversity and that it is not a dominated event anymore,” said Klein. “We are happy we were able to return to Donner Ski Ranch.  We opened here 7 years ago and it’s awesome to be back at the gorgeous scenery.”

The final event in the W.E. Rock Western Series will be held in Salt Lake City, UT as a night event on July 30-31, 2010.  Come watch rock crawling under the stars!