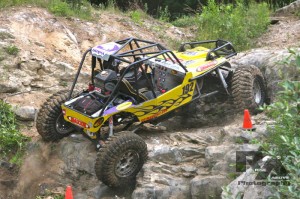 The second round of the Eastern W.E. Rock Pro Rock Crawling Series was part of the Ultimate Motorsports Championship (UMC) at the Badlands Off Road Park in Attica, Indiana.  The weekend of events suffered weather conditions that undeniably affected the results of the rock crawling events.  “We had intermittent rain throughout both days which always makes for an interesting rock crawl comp,” said Rich Klein, President and founder of W.E. Rock Events.  “There is no doubt that tire composition and brand played a role with Maxxis sweeping the podium for both the ProMod W.E. Rock competition and the Ultra4 race.”

The Wild Oats and Maxxis team of Ken Blume, Branden Blume and Kyle Bruso were on hand to compete in both WERock and Ultra4.  Due to scheduling conflicts, son Branden took driver of record on Saturday for the first four rounds, while dad Ken raced his first Ultra4 event, with the intent of Ken competing on Sunday.   When Branden and Kyle finished Saturday ahead of the competition by six points, the decision was made to keep the team together where they eventually completed all courses with a -126; 40 points less than the nearest competitor Josh Crowe and Rich Duvall from Crowe Motorsports.  Danny Rohrer and Chad Rolfert took third in class. 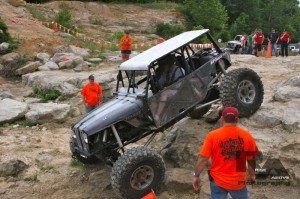 The Unlimited class saw a return of Mike Ardizzone and Jonathan Dawes; they had missed the first event of the season due to some personal commitments, but came on strong with some very technical driving to win by over 100 points.  The other Unlimited drivers, Josh Jordan and Jason Brown, each had mechanical issues with their cars finishing second and third respectfully.

The Modified Stock class winner was Drake Garretson from Come Get Ya Some racing.  His dad Duane Garretson is the normal driver, but instead he was out of the car spotting!

The Sportsman class at WE Rock is designed for those who are new to the sport, but also to give some of the old timers’ a reason to come out and remember how much fun rock crawling is.  The teams of Dave Cole & Jon Terhune and Chris Smith & Josh McIntosh were able to compete on the first day.  On day two, the Four Wheel Parts / Branik team of Darryl Mattingly and Mike Devore continued to school the rest of the competition, winning handily with a -121.  Second place would go to Steve Brown and Travis Snider.  Third to Duane Garretson with his regular spotter Matt Allen.  Fourth went to Paul Figge and Mark Brandt with fifth to Dale and Dean Unnerstahl.  Jon Terhune took sixth and Chris Smith took seventh.  The first time team of Jessica Brandt and her mom, Rhonda Brandt gave it their all and took eighth. 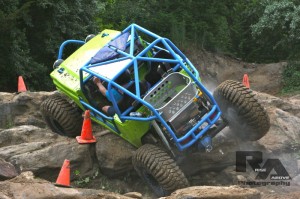 All the competitors from this event and more are already committed to attending the final Eastern Series event in Dayton, Tennessee at the Kizzar’s on August 9 & 10.  The season championship will be determined at the close of that event before going onto the Grand Nationals in Cortez, Colorado September 27-29, 2013.  For more information go to https://www.werocklive.com/2013/w-e-rock-eastern-3-dayton-tn

Professional Rock Crawling is one of the most intricate sports in the motorsports arena.  It is technical, mechanical and filled with action.  The rock courses are setup on a wall where spectators can bring their chairs and be able to see multiple courses running at the same time.  The two day format includes 4 courses of competition on Saturday and another 4 courses on Sunday.  The winners are determined by the driver that has the least amount of points at the end of the weekend, similar to golf. 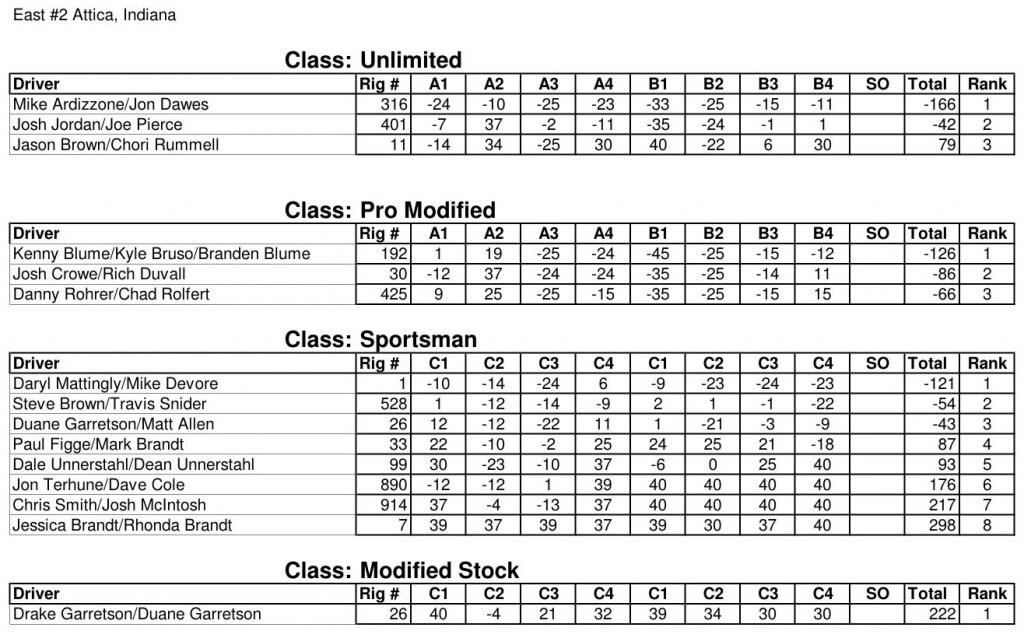 This will be the second round of the Eastern Series Pro Rock Crawling Series.  We will be running this competition as part of Badlands Offroad Park UMC event.  There are a lot of great offroad events going on all at the same time during the day including the an Ultra4 King of the Hammers qualifier!  An event worth going to for sure!  For More information on the whole event CLICK HERE

CLICK HERE to pre-purchase tickets.  Please be advised, you are purchasing through Badlands Offroad Park, not WERock Events.  These are rain or shine events, no refunds. 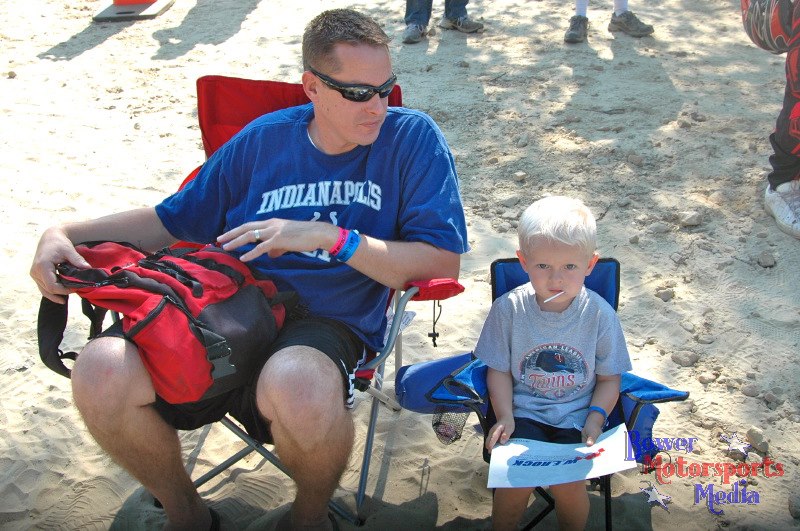 We have autograph cards for all the kids 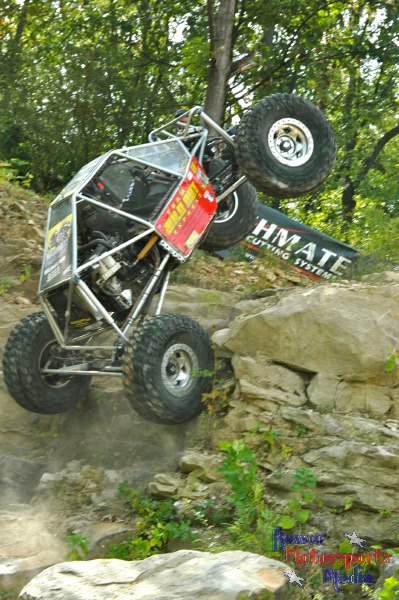 PLACERVILLE, CA   JUNE 20, 2013:  The second round of the Eastern W.E. Rock Pro Rock Crawling Series will be this weekend as part of the Ultimate Motorsports Championship (UMC) at the Badlands Off Road Park in Attica, Indiana.  The three day event will include two full days of extreme rock crawling action in the quarry at the south end of the park.  “The rock quarry at the Badland park has always been a drivers favorite.  There are so many different types of terrain in one area that it challenges even the best drivers,” said Rich Klein, President and founder of W.E. Rock Events. “We encourage those that may think that they are just coming to watch the weekends events to bring their wheeler and participate in our Sportsman Class.  It is basically a run what you brung class that isn’t so difficult that you can’t have fun and be successful.  We already have three drivers preregistered in this class: Steve Brown, Paul Figge and Chris Smith; so it should be a great time!”

Rock crawling starts at 9am on both Saturday and Sunday. There will be a slight break in the rock crawling action to allow competitors and spectators to watch the Ultra4 King of the Hammers qualifying runs around 10am on Saturday. The rock crawling event will end early afternoon to accommodate the main race later that afternoon.

To those that are entered into the UMC Ultra 4 race on Saturday, W.E. Rock is offering a one day (Sunday only) sportsman class consisting of 4 obstacles.  The same car must have raced on Saturday to qualify for the class and will be competing for trophies and bragging rights. 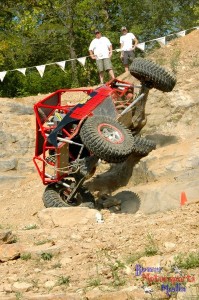 Professional Rock Crawling is one of the most intricate sports in the motorsports arena.  It is technical, mechanical and filled with action.  The rock courses are setup on a wall where spectators can bring their chairs and be able to see multiple courses running at the same time.  The two day format includes 4 courses of competition on Saturday and another 4 courses on Sunday, with a final shootout on Sunday afternoon which usually determines the final finishing positions!  The winner will be determined by the driver that has the least amount of points at the end of the weekend, similar to golf.

There are over a dozen drivers already committed to coming to compete, some driving over 14 hours to be part of this professional series.  Pro Mod Drivers include last years series winner Kenny Blume along with long time competitors and crowd pleasers Josh Crowe and Danny Rohrer.   Local 4×4 participants are encouraged to participate in the Sportsman Class.  W.E. Rock is a Professional Rock Crawling series composed of 2 series of 3 events each that crisscross the country.

There are vendors, food and amenities on site, and we encourage you to bring chairs and shade structures. There is camping available onsite for competitors and nearby for spectators.  For additional details go to https://www.werocklive.com/events/w-e-rock-east-round-2.

After the event we will have the results, pictures and stories posted at https://www.werocklive.com/2013/w-e-rock-eastern-2-badlands-umc-event for the W.E. Rock Rock Crawl. 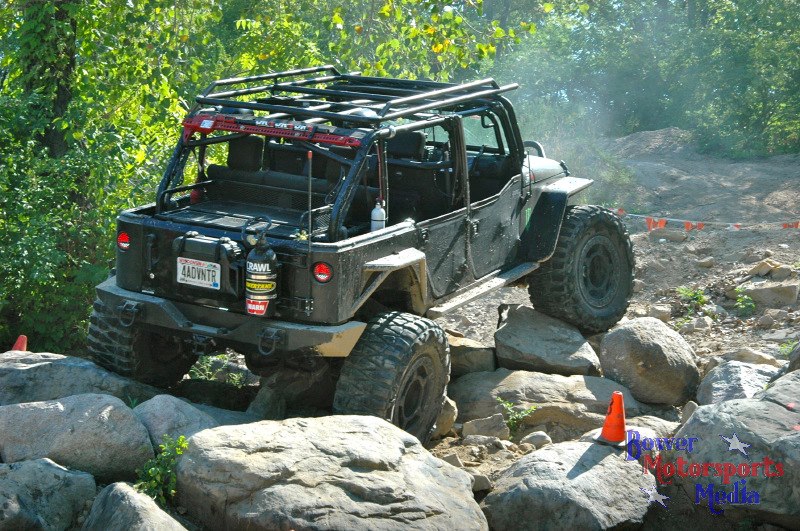 See the Pictures, Results and Video from First Round in Dayton, TN: https://www.werocklive.com/2013/w-e-rock-eastern-1-dayton-tn

For those that are entered into the UMC Ultra 4 race on Saturday and would like to rock crawl on Sunday if you are still running – we will offer a one day (Sunday Only) sportsman class for those that raced on Saturday.
Same car must have raced on Saturday to qualify for class.
4 obstacles
Run with the crawlers on the same courses
You asked and here it is
$75 entry trophy only payback and bragging rights
Sunday morning sign up…. 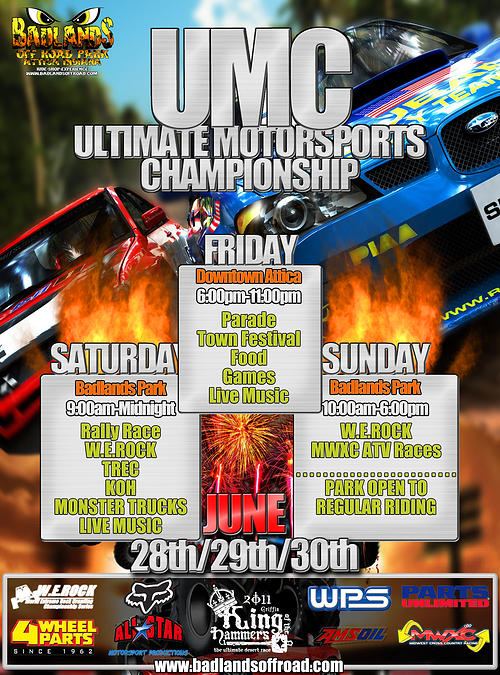