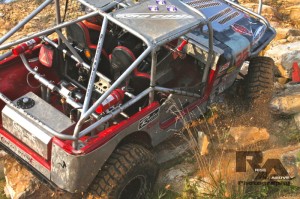 PLACERVILLE, CA   AUGUST 22, 2013:  The final round of the W.E. Rock Eastern Professional Rock Crawling Series showed up in Dayton, TN just as the rain plagued the South East and specifically Dayton.

“Rain fell everyday leading up to the event, so we decided to leave out the hard climbs and make most of them challenging drops instead. Of course, on event day, no rain fell and it made the courses much easier than expected, resulting in some record breaking scores for both Unlimited and ProMod cars,” said Rich Klein, President and founder of W.E. Rock Events. “It was the first time in Dayton that every fan stayed to the end and came, not just to party, but to enjoy every minute of the competition.  For that, we thank our dedicated fans that enjoy the sport.”

Josh Jordan and Mike Ardizonne went head to head in the Unlimited Class competition.  While Mike outscored Josh on every course, the tables may turn in 2014 when Josh comes out with his new car. Next year we will also see Tom Campbell returning to the competition as well. 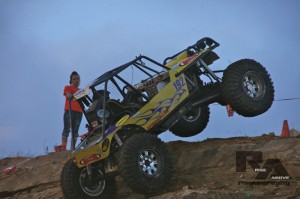 The ProMod competitors included Branden Blume with his spotter/dad Ken Blume, Josh Crowe with Rich Duvall and Danny Rohrer with Chad Rolfert.  The Blume team came into the weekends competition with two event wins under their belt, and by the end of day one they were in the lead for a season sweep.  On the morning of day two, they pushed their lead by 10 points, and then the second course happened.  A tough course that required some extra time to get through an obstacle, the Blume’s ran out of time and scored a 30; Danny Rohrer was up next and drove an almost perfect score of -20.  What had been a 10 point lead by the Blumes, became a 40 point lead for Rohrer.  The competition continued hot through the last two courses.  Danny Rohrer would win the event, but the Blume’s took home the Series win with a second.  Josh Crowe finished third with a very respectable -42.

The Pro Modified Sportsman Class also had very respectful scores with Duane Garretson from Come Get Ya Some earning negative scores on all but two courses.  Garretson would take first with Chris Smith in second. 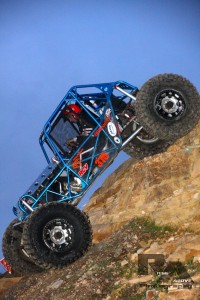 The final event of the 2014 season will be in Cortez, Colorado at the Grand Nationals where the West drivers will meet the East drivers in a huge shootout.  Professional Rock Crawling is one of the most intricate sports in the motorsports arena.  It is technical, mechanical and filled with action.  The rock courses are setup on a wall where spectators can bring their chairs and be able to see multiple courses running at the same time.  The two-day format includes 4 courses of competition on Saturday and another 4 courses on Sunday, with a final shootout which usually determines the final finishing positions!  The winner will be determined by the driver that has the least amount of points at the end of the weekend, similar to golf.

There are vendors, food and amenities on site, and we encourage you to bring chairs and shade structures. There is camping available onsite.  For additional details go to www.werocklive.com

As always, the crowd in Dayton, TN was amazing! Thank you all for the hospitality…we love coming here!

Will have the complete score sheet and Updated Series points posted on Monday!

Great night one in Dayton, TN tonight for the final round of the Eastern Pro Series Rock Crawling Event… In Pro-Mod, Branden Blume is leading by 1 point over Danny Rohrer. Mike Ardizonne is leading the Unlimited class and Duane Garretson is leading Sportsman.

The event continues tomorrow night at 7pm EST. See you then!

We are very excited to be back in Dayton, TN for the second of two rounds of the Eastern Pro Rock Crawling Series!!

See the Pictures, Results and Video from the First Round of Rock Crawling in Dayton!
2012 Dayton, Round #1:  CLICK HERE

this Weekend in Dayton, TN

PLACERVILLE, CA   AUGUST 7, 2013:  The final round of the W.E. Rock Eastern Professional Rock Crawling Series comes to Dayton, TN this weekend completing their 14th year of regular season competition. The event is very spectator and family friendly with the professional drivers available to sign autographs and throw gifts into the crowd in midst of the competition.  “We kicked off our season here and now we will be wrapping it up!  The drivers are excited to show off all their talents to the local crowds,” said Rich Klein, President and founder of W.E. Rock Events. “We really appreciate everyone that comes out to cheer on the competitors.  They work hard all year to put on a show, and they really bring the show to Dayton!”

Professional Rock Crawling is one of the most intricate sports in the motorsports arena.  It is technical, mechanical and filled with action.  The rock courses are setup on a wall where spectators can bring their chairs and be able to see multiple courses running at the same time.  The two day format includes 4 courses of competition on Friday night and another 4 courses on Saturday night, with a final shootout on 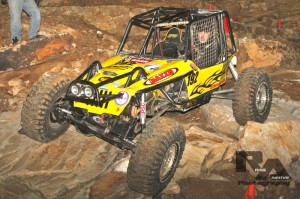 Saturday night which usually determines the final finishing positions!  The winner will be determined by the driver that has the least amount of points at the end of the weekend, similar to golf.

There are over a dozen drivers already committed to coming to compete, some driving over 14 hours to be part of this professional series.  Names that are familiar include Unlimited Drivers Josh Jordan, Jason Brown and Mike Ardizzone. Pro Mod Drivers include last years series winner Kenny Blume, son Branden Blume and spotter Kyle Bruso, along with long time competitors and crowd pleasers Josh Crowe and Danny Rohrer.  Additional drivers that are scheduled to compete include Duane Garretson, Chris Smith and others.

Local 4×4 offroaders are encouraged to participate in the Sportsman Class and join us in two nights of competition and fun.  Vehicles must have doors, roof, 4 point harnesses, 2 fire extinguishers and competitors must wear DOT helmets.  Enter online https://www.werocklive.com/events/w-e-rock-east-round-3/ or onsite. 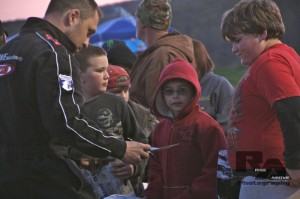 Spectators are encouraged to come and enjoy both nights of entertainment with gates opening at 6pm Eastern Time and the action starting at 7pm until late night.  The awards ceremony immediately follows the final Shootout on Saturday night. Admission is $25 for a two day pass, $15 for adults, $5 for ages 8-15 with a parent, $10 for ages 8-15 without a parent, children 7 and under free and Military with ID get $5 off.   You can pre-purchase tickets at https://www.werocklive.com/events/w-e-rock-east-round-3.

There are vendors, food and amenities on site, and we encourage you to bring chairs and shade structures. There is camping available onsite.  For additional details go to https://www.werocklive.com/2013/w-e-rock-eastern-3-dayton-tn.

SEE YOU AT THE EVENT!!

Did you see the commercial???  The Dates are Different…but the Action is the Same…. 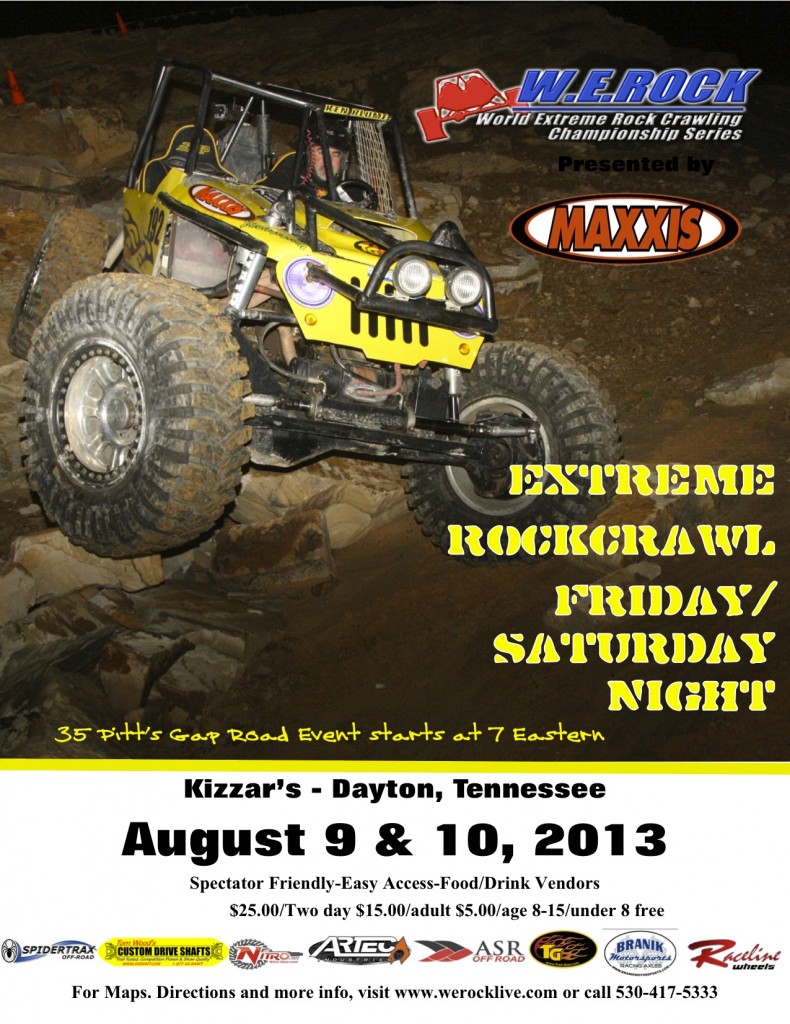