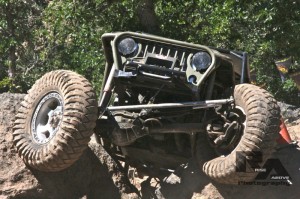 When the final round of W.E. Rock Trail-Gear Western Pro Rock Crawling started in Goldendale, Washington on Saturday morning, three ProMod drivers were tied for first place.  By the end of the weekend the winners of the event would also decide the Season Series winners and more exceptional stories of sportsmanship would be created and shared with many.

“We had a great turn out with 10 Pros and 16 Sportsman.  Goldendale is a very popular venue and we are always glad to be here.  The narrow ridge of lava rock is challenging for the driver and it creates excellent viewing areas for spectators from all angles,” said Rich Klein, President and founder of W.E. Rock Events.  “This event closes our 14th year of regular season Western Pro Rock Crawling, it has been a lot of fun, a challenge, and we look forward to next year and the future.”  The Eastern Series wraps up in Dayton, TN on Friday and Saturday August 9th-10th, then the East meets the West at the Grand Nationals in Cortez, Colorado on September 28th -29th. 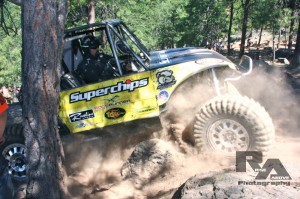 The winner of the Pro Mod class was Jason Feuilly and Cody Folsom, they had an incredible run for two days, even rolling over and righting themselves to continue.  Jason and Cody were the only ones to finish every obstacle over the course of the weekend.  The three teams that had been tied for first at the start of the weekend were drivers Aaron Sykes, Jared Neff and Jesse Haines, who finished second, third and fourth respectively, giving Aaron Sykes the National Series win.  Shawn McNearney took fifth and Mike Stokes finished sixth.

The Unlimited drivers pulled together as a team to keep everyone in the competition.  On the first course of the day, Trail Gear’s Matt Messer finished but broke his transmission in the process.  But that wasn’t the end to his weekend; all the teams got together and helped put the car back together in the pits.  W.E. Rock has a 45-minute breakdown rule, but in order for it to apply a team must be ready to run the course.  In this case of great sportsmanship, no teams reported to the start line, so Matt Messer’s breakdown time never started.  By the time he was back together, there was still plenty of time for the teams to get all four obstacles in during the day.  A similar situation happened on Sunday when Justin Hall cracked an oil pan and needed more time to fix their rig.

When all eight courses and the shootout was complete on Sunday afternoon, it was Justin and Mark Hall that were on top of the podium.  They had swept the Unlimited Class all season making the son and father team the National Series winner!  Matt Messer and John Gabriel finished second, Todd Young and Tate Elquist challenged them for third and Randy and Tyler Southall finished fourth. 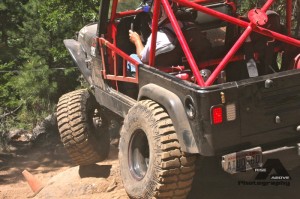 Competitors will be attending the Grand Nationals in Cortez, Colorado September 27-29, 2013. This is where the Eastern drivers meet the Western drivers in a head to head competition.  There are vendors, food and amenities on site, and we encourage you to bring chairs and shade structures. There is camping available onsite for competitors and nearby for spectators.  For more information go to www.WERockLive.com.

Professional Rock Crawling is one of the most intricate sports in the motorsports arena.  It is technical, mechanical and filled with action.  The rock courses are setup on a wall where spectators can bring their chairs and be able to see multiple courses running at the same time.  The two day format includes 4 courses of competition on Saturday and another 4 courses on Sunday.  The winners are determined by the driver that has the least amount of points at the end of the weekend, similar to golf. 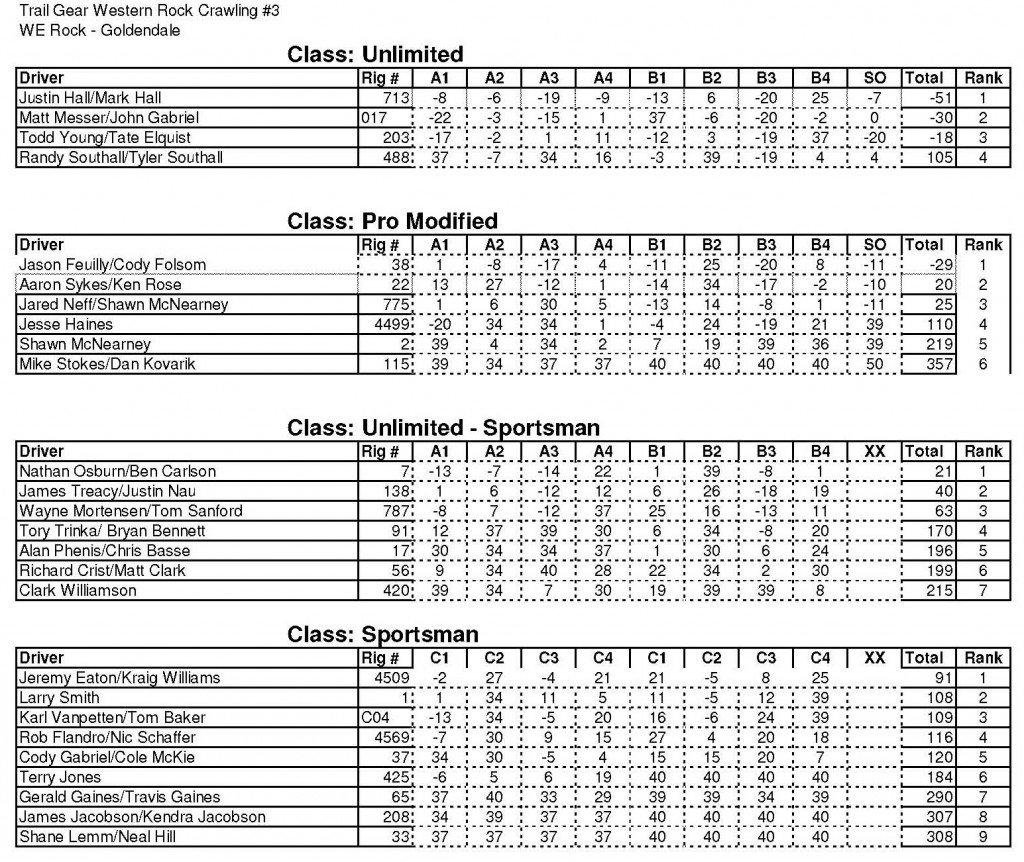 Day 1 – Saturday – Long day of Rock Crawling in Goldendale, WA! 26 competitors on course…10 are Pros and excited to have all the Sportsman Class competitors!

As it stands going into tomorrows competition:

Can’t wait to see how tomorrow goes…should we remind everyone that the Season Championship is on the line…Pro Mod top three were tied! 🙂

Check out the points going into this weekend…. https://www.werocklive.com/2013/w-e-rock-season-points-standings/

>>A MUST WATCH VIDEO<<
MANY MORE VIDEOS OF SPECIFIC DRIVERS: CLICK HERE

Three in a Row 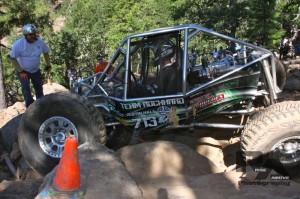 The courses in Goldendale were extremely tough, pushing each rig to their absolute limits. Matt Messer of Trail Gear broke his turbo 350 transmission on the first course of day one. With some outstanding camaraderie, Justin and the entire Unlimited class shut down and were all over helping Matt fix his buggy just so he could still be in the running. With Saturday coming to an end, Justin was in the lead by just a mere three points ahead of Matt Messer.  Come day two, Justin realizes that the front differential was literally starting to tear out of the axle housing. With some quick thinking he managed to borrow a welder from Todd Young, and proceeded to make a quick trail fix in hopes that welding some steel across it would last the rest of the event. About three gates into the first course, Justin cracks his oil pan. After finishing the course, Justin rushes back to the trailer to work on fixing the crack. Just like on Saturday, the Unlimited class shut down and waited for, Justin this time, to fix his buggy before starting the other courses. There really is no other sport that has this level of sportsmanship.

SUBMIT YOUR TEAM RECAP WITH LINK TO [email protected]

We are very excited to be back in Goldendale, WA for the third and final round of the Western Pro Rock Crawling Series!! 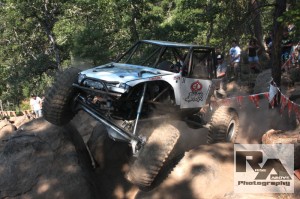 PLACERVILLE, CA   JULY 18, 2013:  The final round of the Western Pro Rock Crawling event in Goldendale Washington will be the last regular event in the 14th year of W.E. Rock. This weekends event will title the Western Series Champion and will set the scene for the Grand Nationals in Cortez, Colorado in September.  “We already have teams here from California and more are on the way from all the western surrounding states to put on a real exciting show.  In the Pro Mod class, three competitors are tied for first in points!” said Rich Klein, President and founder of W.E. Rock Events.  “There are large beautiful trees here at the park where spectators can utilize the shade and still see all the action.  Those same trees, big boulders made out of lava rocks and old lava ledges that are over 10ft tall are going to make it challenging for the drivers!”

Rock crawling starts at 10am on both Saturday and Sunday.  Professional Rock Crawling is one of the most intricate sports in the motorsports arena.  It is technical, mechanical and filled with action.  The rock courses are setup in an area where spectators can bring their chairs and be able to see multiple courses running at the same time.  The two day format includes 4 courses of competition on Saturday and another 4 courses on Sunday, with a final shootout on Sunday afternoon which usually determines the final finishing positions!  The winner will be determined by the driver that has the least amount of points at the end of the weekend, similar to golf. 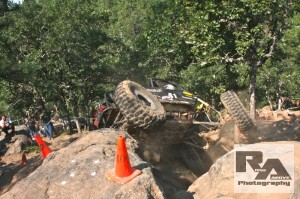 There are over a dozen drivers already committed to coming to compete, some driving over 20 hours to be part of this professional series!  There are currently three Pro Mod drivers that are tied for first place.  Aaron Sykes, Jared Neff and Jesse Haines are going to go head to head in a heated final round.  The finishing order of the event will determine the winner of the series!  Not to mention Jason Feuilly and Mike Stokes that are only a few points off!

In the Unlimited Class, Justin Hall has won both of the events to date and currently leads the series.  Matt Messer and Randy Southall are currently tied for second.  Again, anything can happen with the points after determining this weekends finishing position

Spectators are welcomed to enjoy either or both days. Tickets can be bought online at https://www.werocklive.com/events/w-e-rock-west-round-3.

There are vendors, food and amenities on site, and we encourage you to bring chairs and shade structures. There is camping available onsite for competitors and nearby for spectators.  For additional details go to https://www.werocklive.com/events/w-e-rock-west-round-3.

After the event we will have the results, pictures and stories will be posted Right HERE!!!

See the Pictures, Results and Video from the First Rounds of Western Rock Crawling!  It has been an awesome series!

SEE YOU AT THE EVENT!! 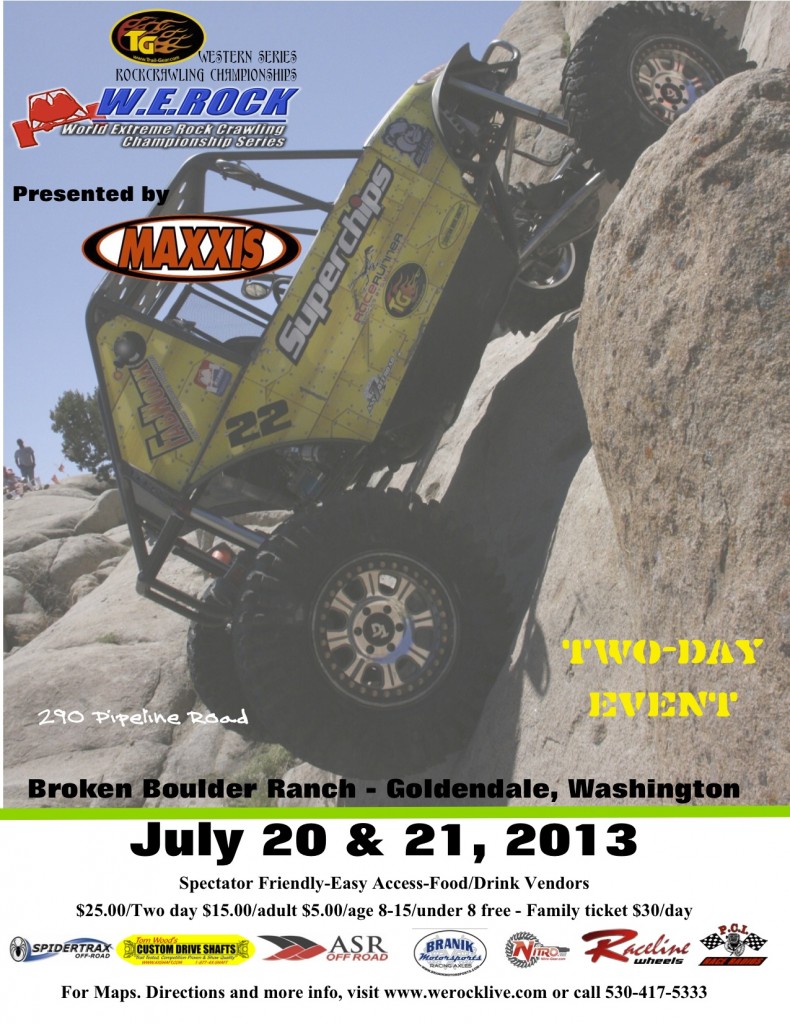