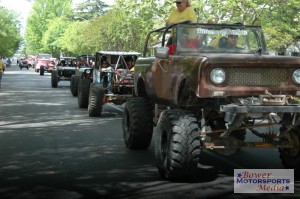 PLACERVILLE, CA   MAY 11, 2010:  The second round of the W.E. Rock Western Pro Nationals concluded last weekend in Oroville, CA at the Urban Assault area at Surplus City.  Brent Bradshaw took the Unlimited Class win in an epic battle to the end, and Roger Norman earned the Pro Mod class win in his rookie season.  Victor Buress has his second win in the Modified Stock class and Bror Wingard took the win in the new Sportsman Class.

The town of Oroville, CA opened its arms to the rock crawling community shutting downtown streets for Tech on Friday night.  Saturday morning the crawlers joined in the Feather Fiesta Days Parade, an annual event in Oroville.  “The crowds loved the rock crawlers, the burnouts and the 10 yard dashes,” commented Bob Frank, Surplus City Urban Assault Manager.  “It was a great show and I am glad that everyone took the opportunity to participate and show off the sport.” 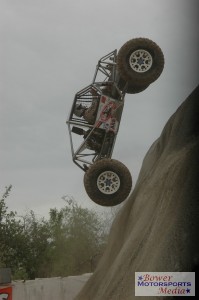 Brent Bradshaw on the Terminator

When the competition started on Saturday the heat was on.  Jesse Haines had a score to settle from Tucson Round 1 with Brent Bradshaw when the win came down to the shootout.  Also coming in with a competition under his belt, Roger Norman felt better about his driving ability; it was up to the others to give him the window of opportunity to shine.

Saturday ended with Brent Bradshaw 3 points ahead of Jesse Haines in the standing and Matt Messer in third.  The amazing action of the day was Brent Bradshaw attempting to climb the 30+ft Terminator.  He landed backwards on his roof, then pulled off an amazing 360degree rotation to get back on all four wheels and immediately attempt the climb again, this time with success!  The Urban Assault, known for its difficulty, took the toll on the racers known for their perfection.  In the Pro Modified Class, Roger Norman and spotter Lance Clifford took the lead with long time drivers Dan Patterson in second and Aaron Sykes and Nick Campbell tied for third.

Mother’s Day Sunday gave some of the Moms in the crowd a bit of a heart throb as their boys challenged the most difficult obstacles and succeeded at setting new records and adding names to the list of ones to accomplish the impossible.  During the competition on Sunday, the back side of the Terminator that has never been approachable got its cards handed to it as Jesse Haines had the finesse to push it to the top.  Forcing his points competitors into the position to try it, 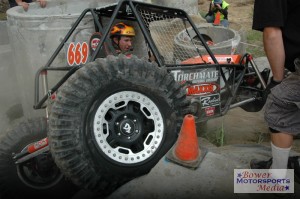 By the end of the day the Pro Modified Class winner was clearly Roger Norman with Nick Campbell in second, too far behind for the shootout points to make a difference in place.  Both Norman and Campbell attempted the shootout, and both were recovered after rolling onto their side.

The scene was set for the Unlimited Class to determine the winner in the Shootout.  During the days competition, Jesse Haines had taken over the lead with Brent Bradshaw 16 points behind, 21 year old Justin Hall only 12 points behind in third, and Matt Messer had dropped to forth after breaking his front Detroit Locker.  The talk of the weekend was the Half-Pipe, a legitimate 25ft tall climb with the last 10ft a true vertical with a lip at the top.  Shannon Campbell had been 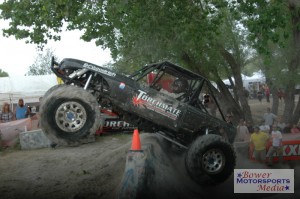 the only one to accomplish this climb in 2009, and now Wayland Campbell and Justin Hall said they were going to try it!  Wayland Campbell was the first on the Shootout course and after running out of time to complete the bonus climb during the actual event, he still went over and lined up as a exhibition.  Dad, Shannon Campbell, pulled a spotters rope to help pull the nose over the top and told Wayland to put his foot in it and commit.  After a couple attempts and rolling on his side, he gave it all and walked away to do it another day.

Next up was Justin Hall who made a valiant effort at the climb during the competition minutes.  He started off with an attempt run and then progressively got more and more aggressive with the climb.  His Mom, Dad and Sister in the wings, Justin flew straight up into the air 30ft and then would land back down on his wheels, and try again.  On the eighth or so try he made it!  The crowd went wild with the accomplishment running to the vehicle to congratulate…but he still 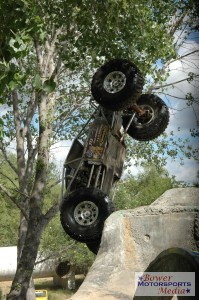 Justin Hall on the Half-Pipe

had to focus to finish the course.  He finished, climbed out of the buggy and stood on the tires in a winners pose.

The competition for first place was still between Brent Bradshaw and Jesse Haines.  Brent Bradshaw took the course next knowing the only way to for sure beat Haines was to attempt the Half-Pipe climb, they prepared the rope and went for it.  Brent Bradshaw made it on the first shot with a spotter strap!  Again the crowd went wild!  Now the heat was really on Jesse Haines to complete the course perfectly and he would also have to accomplish the vertical climb.  Jesse struggled through the opening section of the course and when finally making it to the vertical Half-Pipe he gave two valiant attempts and landed so hard on the second try that he broke the transmission case and the whole car is twisted about a half inch among a list of other necessary fixes. “It’s more damage than I’ve ever done to a car in 8 years of competition, and there could be more I haven’t found yet,” said Jesse Haines who reluctantly took second place in the competition.

The Mod Stock class was composed of KrawlZone.tv Victor Burness.  His lack of competition didn’t stop him from trying the harder obstacles and challenging himself to low scores.  W.E. Rock coverage will be on KrawlZone.TV and on many other media outlets throughout the rock crawling nation.

New to W.E. Rock this year is the welcomed Sportsman class.  The Sportman Class is open to any competitor and brought 2 competitors to the starting gates in Oroville.  Bror Wingard and Wesley Coon took their stock rigs and competed for the win.  They both had a lot of fun pushing themselves and their rigs to the max, both ending up on the trailers by the end of the weekend with smiles.

The next W.E. Rock West National Series stop will be near Salt Lake City, UT June 10-12, 2011 at the Miller Motorsports Park.