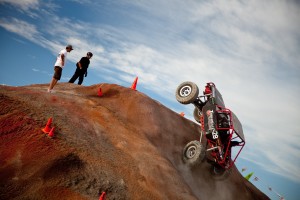 PLACERVILLE, CA   AUGUST 3, 2010:  The W.E. Rock Western Pro National Final held at the Miller Motorsports Park in Salt Lake City, UT finished the season with a different winner in both the Unlimited and Pro Modified classes for the fourth competition in a row.  There were several battles over the course of two days fighting to be the winner in each class of this final race of the series.

Both the Unlimited and the Pro Modified class had top three place battles going all weekend.  In the Unlimited class, it came down to the shootout where Dion Wakefield from Canada proved to be a huge threat by taking first place. Brent Bradshaw was hot on his tail with a close 2nd place finish, and Matt Messer finished 3rd.  In the Pro Modified class, Jesse Haines claimed the win over Nick Campbell, taking it down to the 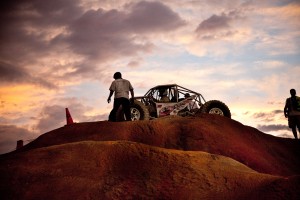 wire and winning the points lead with his shootout score. Troy Bailey took third in the class rounding out yet another amazing competition.  “Every single event in the W.E. Rock Western series has been won by someone different in the Unlimited and Pro Modified classes,” said Rich Klein, W.E. Rock Promoter.  The Unlimited winners have been Tracy Jordan, Brent Bradshaw, Matt Messer, and Dion Wakefield.  The Pro Modified winners were Troy Bailey, Brad Lovell, Nick Campbell and Jesse Haines.

Dan Patterson took his third win of the season in the Modified Stock class, while Todd Stephensen the winner of the Arizona event took second.   A similar pattern in the F-Toy class put Nathan Unruh on the podium with his third win with Chris Mercer in second who took the win at Donner Ski Ranch.

One of the most exciting parts of the event was the introduction of what is being called the “dueling shootout.”  Due to time constraints, W.E. Rock put a Pro Modified car on one course and an Unlimited car on an adjacent course and gave them 6 minutes (instead of 10) to finish the course while also battling it out against each other.  “This was very exciting to watch and will be something we will definitely see more of in the future,” stated Klein.

The rock crawling area built at Miller Motorsports Park is the most state of the art facility ever used by W.E. Rock.  “It was awesome being able to compete at a event site of that caliber who has Indy cars and NASCAR and is opening its doors to rock crawling,” said Klein.  “The terrain was tough, but had a considerable amount of traction this time around.  Don’t worry, it will be re-shot before the nationals, leaving almost no traction at all.  It will end up being probably the most difficult course on the circuit.”

The Western Pro National Schedule is complete, but the season finale and the Western Champions will be crowned at the Grand Nationals hosted at Miller Motorsports Park October 1st and 2nd.  The best from the East and the West come together and compete for the Grand National Title which is already shaping up to be a huge event with over 60 rock crawlers ready to compete. W.E. Rock is a great family friendly event to bring the kids and get them interested in rock crawling.

You Tube of Event: http://www.youtube.com/watch?v=8Z4q3CK2jFE