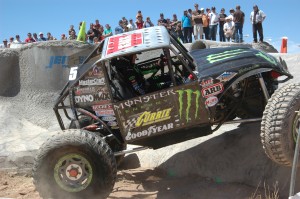 PLACERVILLE, CA   APRIL 11, 2010:  Core rock crawlers entered the arena in Tucson, AZ to compete for the first round of the W.E. Rock Western Pro Nationals.  With a limited number of vehicles in each class, the community and the competition was tight.  Brent Bradshaw took the win in the Unlimited class by one point, Nick Campbell finished first in the Pro Mod class, Victor Burness drove his Mod Stock to the finish and Uriel Varela won in the new Sportsman Class.

The Unlimited Class consisted of the core of rock crawling totaling over 50 years of experience.  Brent Bradshaw from Trail Tough, Torchmate Racing Jesse Haines, Matt Messer from Trail Gear, and Wayland Campbell the 15 year old son of Shannon Campbell, of Campbell Enterprises.  There was certainly no lack of talent, so the final results would come down to the vehicle; the spotter; the circumstances.  And that is exactly what happened.  The final shootout on Sunday 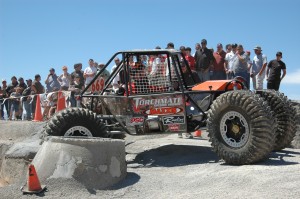 determined the final outcome.  Haines, Bradshaw and Messer went into the shootout within 4 points of each other respectively.  Messer had the shifter cable pull out and could not complete the course while Bradshaw had a near perfect run with a -3 after the bonus, and Haines rolled through the finishing gates with time to spare without attempting the bonus.  The results: Bradshaw took the win by one point!

The Pro Mod class also had big names, but an interesting mix.  Well known Nick Campbell from Campbell Enterprises, long time crawler Troy Bailey from Cedar City, UT, Infamous4x4 Aaron Sykes and a rookie to the discipline but not to racing; Trophy Truck driver Roger Norman suited up for Torchmate Racing.  In a late day Saturday scare, Campbell sent out a SOS for a new engine when he lost complete power, but after missing a course and investigating further it was only loose torque converter bolts that allowed him to run for the win on Sunday.  Troy Bailey’s spotters finger had a run in with a rock in the very first course, and after 9 stitches Saturday night Bailey used a 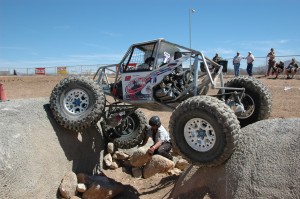 different spotter for Sunday.  Aaron Sykes, attempting to go for a bonus line, rolled the car and in his crowd pleasing attempt at up righting the rig, he also ended up breaking and missing the last courses of the day.  The newest competitor, Trophy Truck driver Roger Norman, had only been rock crawling for 6 hours prior to his debut appearance and now openly praises the difficulty and technicality of the sport.

The Mod Stock class was composed of KrawlZone.tv Victor Burness.  His lack of competition didn’t stop him from trying the harder obstacles and challenging himself to low scores.  W.E. Rock coverage will be on KrawlZone.TV and on many other media outlets throughout the rock crawling nation.

New to W.E. Rock this year is the welcomed Sportsman class.  The Sportman Class is open to any competitor and brought 5 competitors to the starting gates in Tucson.  Uriel Varela took first with Jeremy Hammer spotting, and then they reversed roles when Fly-N-Hi Offroad Jeremy Hammer drove his Ultra4 car for a 3rd place finish.  Dave Ashman from a local club participated in his Toyota and took second.  Mark Tenniswood competed only on Saturday and Mike Klensin from Crossed-Up Offroad competed only on Sunday, well, for only one run on Sunday when he unfortunately broke.

The next W.E. Rock West National Series stop will be in Oroville, CA May 6-8, 2011 at the Surplus City Facility.  W.E. Rock will be part of a festival of events happening in Oroville that weekend.

You Tube of Saturday Event: http://www.youtube.com/watch?v=EFVAwBJ29xk

You Tube of Sunday Event: http://www.youtube.com/watch?v=ZSrZLR3Mi7Q