2015 Kickoff to W.E. Rock Rock Crawling and Dirt Riot Endurance Racing Has Spectators on Their Toes Both Days

The Arizona desert is the perfect place for an early spring event, and it proved to be a nail-biting, action packed, two days worth of competition with the Trail-Gear Western W.E. Rock Championship Rock Crawling on Saturday and the Dirt Riot Endurance Series race on Sunday. The weekend at Thompson’s Ranch in Congress, AZ, a short hour from Phoenix, was sponsored by Jones Ford and Fly-N-Hi Offroad. Not only was there action on the course, but also had a very busy vendor row including JM Rigging, the Sickline, KC Hilites, Trail-Gear, Jones Ford, MetalCloak, Artec Industries displaying alongside ADS Shocks providing race support and the W.E. Rock General Store.

“We can’t thank the crowd enough for coming out and letting the drivers put on a spectacular show for you all,” said Rich Klein, President and founder of W.E. Rock Events. “From nose-wheelies to roll-overs, we love being able to bring this type of racing to venues across the country.”

There were 29 vehicles on Saturday’s course to kick off the 15th season of WERock, a step back towards the ‘old school’ rock crawling days with multiple classes stacked with competitors. The competition was fierce in all classes, but the 12 Unlimited drivers took it to the extreme. Going in to the final shootout of the day, the top three were within 6 points of each other. Huge climbs, huge drops, crowd-pleasing excitement. The top four drivers were allowed to enter the shootout, Moab 4×4 Outpost Steve Nantz in a distant 4th place was first up, who opted not to run due to the failing light as the sun was setting, a true act of sportsmanship, he wanted the top three to be able to conclude their runs in the daylight. So Team Rock Hard Justin Hall took the course first. Justin successfully completed 2 of 3 bonuses and finished with a -5. Team Climax Matt Heimsoth, in second place going in, needed a -3 to hold the spot, he finished with an 11 after producing one of the most amazing nose-wheelies in recent rock

crawling history, but breaking through the banner. (Video: http://on.fb.me/1FfpSwW) Scores were now, -67 and -80, all 360 Racing Justin Kielman needed was a -2 to win. Justin opted for a clean run, skipped the first 2 bonuses but as he was progressing to gate 4, he slid into a cone. He now had to take the final bonus to win, no choices were left to him, anything else was going to give him a positive number, but a negative outcome.   Justin sailed through the final bonus with his spotter Jason Jordan to end the course with a -7 and his first win.

Sunday seemed to dawn early after a full day of rockcrawling, but the Dirt Riot competitors were ready to go at 8 a.m. for their driver’s meeting.  To read all about Saturday’s Rock Crawl – CLICK HERE 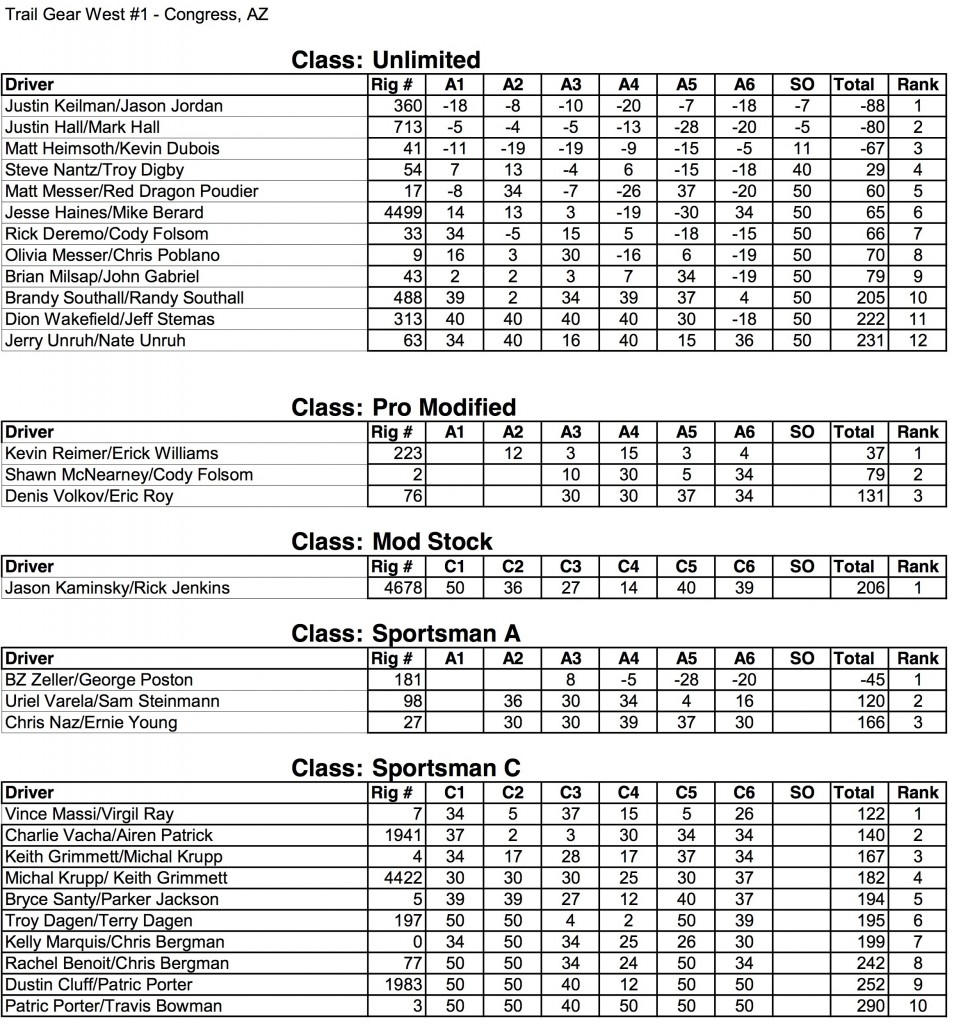 The one day Rock Crawling event starts at 9am.  Four classes of rock crawlers will be challenged to 6 courses each.  The top 4 in the Pro Mod and Unlimited Classes will go into a shootout at the end of the day to determine the winners.

Sunday, Dirt Riot will be racing around the property in a endurance style event.  More Information on that event can be found HERE.

We welcome all to the Drivers Meet & Greet at Arrowhead Resort on Hwy 89 in Congress.