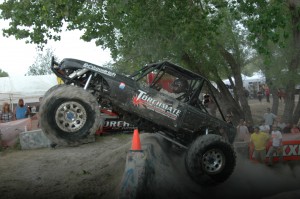 The W.E. Rock Western Series round 2, Day 1 has finished in Oroville, CA at Surplus City Urban Assault.  The line up was packed with big names for the second round in a row.

The crew started the day showing the crowds of Oroville rock crawlers in the Oroville Feather Fiesta Days Parade.  Thousands of people lined the streets and were excited to see all the rock crawlers run down the road sideways, and the large engines roar in the 20ft dashes.

Brent Bradshaw from Washington is in the lead in the Unlimited class by 3 points.  The most amazing stunt of the day was pulled off by Brent: attempting the Terminator, flipping backwards, popping back onto his wheels, and continuing onto complete the course!  Jesse Haines had a solid day and sits in second place with Matt Messer not far behind in third.

Pro Modified Class rookie Roger Norman is sitting in the lead after the first day of competition.  With Lance Clifford spotting, Trophy Truck driver Roger Norman is learning quickly how to use finesse, and the skinny pedal to rock crawl including how to drop off ledges and do the longest nose wheelie all day.  Dan Patterson had a great day putting him in second, and with some challenges and side panel dings from rolling Nick Campbell and Aaron Sykes are tied for third. 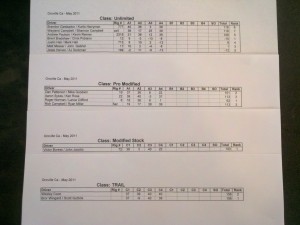 Victor Buress from KrawlZone.tv came all the way from Colorado to run their Mod Stock.  They got hung up on some of these challenging obstacles that Urban Assault Offers.

Bror Wingard and Wesley Coon competed against each other in the Stock Class.  More roll overs, huge climbs and laughing from inside the cab kept these two guys hitting each obstacle.

Tonight there will be a Live band at the event compliments of Raceline Wheels.

Tomorrow Competition starts at 10am.

Look for many pictures and videos from the day next week.