Final Results for W.E. Rock Round 2!  Congratulations to all the teams competing. This was a well fought battle by all! 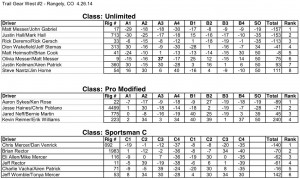 Day 1 Results:  MORE ACTION starts at 10am on Sunday with 4 more courses plus a spectacular shootout course. 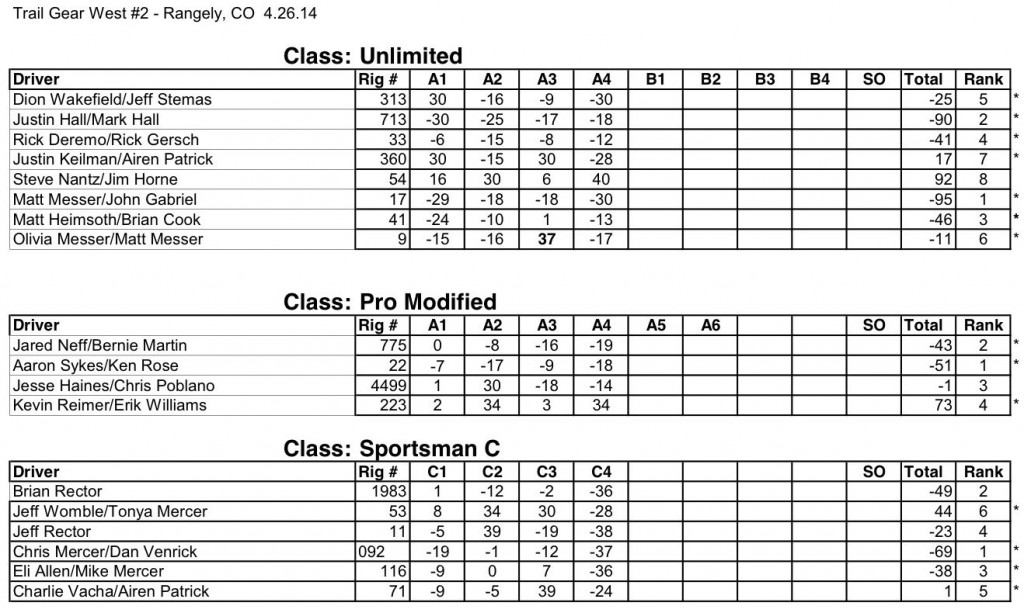 BLM has issued an update regarding the OHV stickers for the Rangely event:  All competition vehicles that are “unregistered and unlicensed” will need a Colorado OHV sticker.    BUY NOW >>  http://parksstore.state.co.us/p-6-ohv-permit.aspx

From Meeker, same as above, but turn Left at Loaf & Jug on far end of town.

LONG TRAILERS: Recommended coming thru Vernal or if on I-70 go to Rifle then Meeker to Rangely.  Stay wide on all turns on dirt road.  Hwy 139 or Flaming George are not recommended for travel with long trailer! 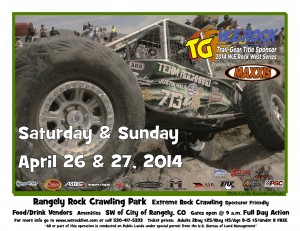 BLACKFOOT, ID   APRIL 24, 2013:  The second round of the Trail-Gear Western Pro Rock Crawling series is happening this Saturday and Sunday at a brand new location in Rangely Colorado.  The battles in each class are extremely competitive, providing a day of high entertainment for all to watch.  The first round of competition in Arizona went well for some, and others need to make up a lot of points this weekend.  “We are really excited to come to the Rangely Rock Crawling Park for the first time ever,” said Rich Klein, President and founder of W.E. Rock Events.  “There are some big and technical rocks here that will give us room to create lots of bonus lines for drivers.  With it being a new location, there won’t be an advantage to any team, they will all have to perform at the pro level to win!”

Rock crawling starts at 10am on both Saturday and Sunday.  Professional Rock Crawling is one of the most intricate sports in the motorsports arena.  It is technical, mechanical and filled with 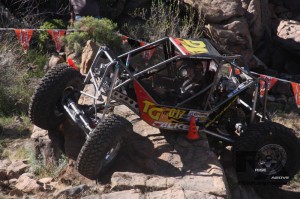 action.  The rock courses are setup in an area where spectators can bring their chairs and be able to see multiple courses running at the same time.  The two day format includes 4 courses of competition on Saturday and another 4 courses on Sunday, with a final shootout on Sunday afternoon which usually determines the final finishing positions.  The winner will be determined by the driver that has the least amount of points at the end of the weekend, similar to golf.

There are over 16 drivers already committed to coming to compete, some driving over 20 hours to be part of this professional series!  In the Pro Mod Class, current points leader Hooked Triangle Racing Jared Neff is followed by Team Superchips Aaron Sykes, by one point.  Also pre-registered is Rad Racing Kevin Reimer from Idaho Falls.

The Unlimited Class has eight pre-registered drivers including points leader Team Rock Hard Justin Hall, Trail-Gear’s Matt Messer and daughter Olivia Messer.  Second in points Mission Snow and Skate Dion Wakefield from Canada will be their to challenge the

title along with Moab 4×4 Outpost Steve Nantz, Team Climax Matt Heimsoth and Blue Water Furnishings Justin Keilman.  In memory of Alec Taber, Bailey Campbell will not be competing at this event, but instead Campbell Racing has lent the car to Rick Deremo who will compete with Alec’s Dad as the spotter.

Spectators are welcomed to enjoy either or both days. Tickets can be bought online at https://www.werocklive.com/2014/w-e-rock-western-series-round-2-rangely-co.  Credit Cards will not be accepted at the gate, please pre-purchase or bring cash.

There are vendors, food and amenities on site, and we encourage you to bring chairs and shade structures. There is camping available onsite for competitors and nearby for spectators.  For additional details go to https://www.werocklive.com/2014/w-e-rock-western-series-round-2-rangely-co.

After the event we will have the results, pictures and stories posted at https://www.werocklive.com/2014/w-e-rock-western-series-round-2-rangely-co for the W.E. Rock Rock Crawl.