Skip to content
Previous Next
W.E. Rock Western US National Series Heats up in Arizona 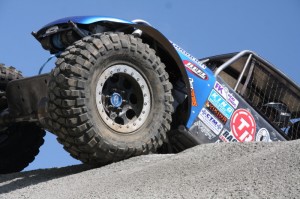 PLACERVILLE, CA    APRIL 26, 2010:   The W.E. Rock Western US National Series heats up Tucson, AZ with national rock crawling competitors at Pima Motorsports Park. The most well respected rock crawlers in the world will compete on a man made rock crawling course that includes a 28ft vertical climb.

With Arizona being a hub for rock crawling, there will be many local teams that will be going head-to-head with the national competitors that come from across the western United States to compete.  The course pushes vehicles to do insane maneuvers that you never thought was possible, and with the new spectator area you are within 10 feet of all the action.

After the first round of Pro Modified racing Troy Bailey from Utah is in the points lead with Nicole Johnson of Nevada in second.   In the Unlimited class, Tracy Jordan from Arizona is on the podium with Brent Bradshaw of Oregon in second.  Dan Patterson from Oregon is in the lead in the Modified Stock class with Tory Trinka from Washington one point behind in second.  Nathan Unruh from Colorado is clearly leading the F-Toy class with Chris Mercer also from Colorado in second.  2009 produced some epic battles that came down to 3-4 point spreads for the championship, and the 4-race 2010 season is looking just as intense.

This weekends competition will begin at 10am on Saturday May 1st and Sunday May 2nd at the Pima Motorsports Park in Tucson, AZ.  The two day adult pass is $25 with one day adult admission $15, ages 8-15 $5 and 7 under free. W.E. Rock is a great family friendly event to bring the kids and get them interested in rock crawling.

Saturday May 1st 10am Competition Begins

Sunday May 2nd 10am Competition Begins