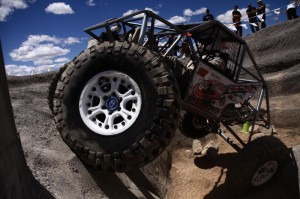 PLACERVILLE, CA    MAY 5, 2010:   The W.E. Rock Ballistic Fabrication Pro National Event whipped up the action and the wind at the Tucson, AZ Pima Motorsports Park.  Local Arizona racers competed against national champions with solid performances on the scoreboards, while the wind scattered vendor row and flustered the concentration of some drivers.  The class winners were Brad Lovell, Brent Bradshaw, Todd Stephensen and Nathan Unruh.

The battle in the Pro Modified class had Jesse Haines leading at the end of day one and day two in his brand new rock crawling rig, but he took second to Brad and Roger Lovell after the final 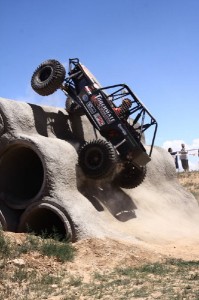 shootout.  Lovell had made several small mistakes in the shootout giving Haines a comfortable lead as he crossed the line and started his time. But Haines took too much time attempting to do one of the big hill climbs and timed out, putting 35 points onto the scoreboard.  Troy Bailey, who had lead the majority of day one, had a huge roll over that put him towards the bottom of the competitors.  On Sunday Bailey successfully worked his way up the points ladder to finish third overall.  Also notable in the class was locals Mike Klensin placing 6th, and fourteen year old Wayland Campbell who took 11th place showing amazing talent that will once again represent the Campbell Enterprises for another generation.

Brent Bradshaw from Oregon took his first ever win in the Unlimited Class with Andrew Paulson taking his first ever podium in third place.  Tracy Jordan had the lead out of day one, but he had a mechanical failure on Sunday when his rear steer moved which resulted in a penalty.  When Jordan opted out of competing in the final shootout he opened the door for Bradshaw to take the win.   “This was a 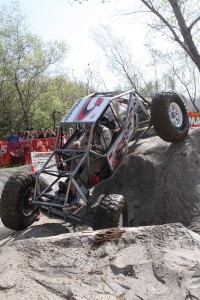 very close battle to the end, and it was hard for the judges to penalize Jordan.  We have worked hard to eliminate gray areas in our competitions and our judges are instructed to ‘call it as you see it’” explained Rich Klein.  Jordan finished second for the weekend.

Todd Stephensen clearly lead the Modified Stock class all weekend.  Dan Petterson made a charge at him late in the competition, but it was too late to overcome the deficit of the day before.  Stephensen finished first, with Patterson and Larry Karver rounding out the top three.

At the end of day one Jake Wright was leading the F-Toy class, but by the end of day two Nathan Unruh from Colorado had taken the clear lead.   With a close battle all day, Unruh took the win with Wright in second and Chris Dunkin in third.

“We had intense battles in 2009, and the 2010 courses are creating just as much competition between all of these amazing teams.  We try and create obstacles that we think will challenge the best, and they still overcome them,” said Rich Klein, W.E. Rock promoter.  The next stop on the Western US National series will be at the most amazing natural course made to man: Donner Ski Resort.  In the meantime, the Eastern US Nationals will have their first event in Rausch Creek, PA.